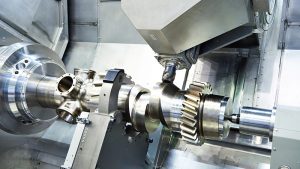 When it comes to manufacturing equipment, lathe machines are incredibly useful and come in diverse models tailored for numerous purposes. As a lathe chuck manufacturer, we know full well the capabilities of these machines and the importance they have for the machining, manufacturing, and industrial sectors.

Let’s take a look at the origins of lathes, how they have developed over time, and why you should choose Dillon Manufacturing to be your lathe chuck supplier.

Lathes Throughout the Centuries

Lathe machines are utilized in the shaping and machining of a variety of parts, removing unneeded material from a product to complete it or make it ready for use with other components.

There are a variety of lathes, which we’ll discuss below, but all of them are utilized for turning, facing, taper cutting, knurling, threading, gear cutting and more for the processing of wood and metal parts.

As the machinery advanced, lathes developed into a variety of forms to fulfill specific needs and keep up with modern machining technologies. These variations include:

At Dillon Manufacturing, we know how essential lathe machines are to companies’ daily operations and we’re proud to help enhance their capabilities with our various lathe chuck types.

We offer a variety of chucks for lathes and other vital machines, along with a host of accessories. Choose from:

If you’re looking for lathe chucks for your essential operations, be sure to reach out to the team at Dillon Manufacturing because we’re ready to supply you with the components you need!

Fill out my online form.
MENU